Came into 2013, I managed to take a photoshoot on New Year’s Day again. This time I didn’t wake up early, we went up to Tubes only at sunset.

So many people came up into the tower who wanted to see the breath-taking sight of the waving fog that I hardly could find a place for my tripod. I took 4 series, but in retrospect, I would have made it in a different way. One of the series contained only 90 images, quite limited usability for video editing purposes. However, the final version of the video contains three of these series:

I took some more pictures: 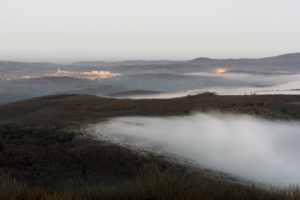 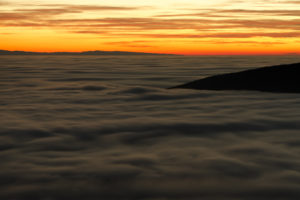 A technical summary of the images above:

For this series, I used ISO100, f11, 1/125 with 10-second intervals between each image. You can use the same settings during daytime if the light conditions are constant. For time-lapse, it is advisable to use fully manual settings.

Here I took photos at ISO100, f11 with 5-second intervals. The shutter speed started at 1/200 and was only 1/20 at the end. I had to compensate the nightfall by changing the shutter speed since it was getting darker. When I started to take sunrise and sunset photos I used aperture priority mode, which was not a good decision. The images were taken with different shutter speed due to the camera’s photometric measurement, so I have to correct the images later one-by-one. All in all basically manual settings are recommended, especially taking sunset or sunrise photos.

This piece was made at ISO400, f5, 6-second shutter speed with 10-second intervals between the images.

While taking photos of the sunrise I used ISO200, f8 with 11-second intervals. The shutter speed was 2,5 seconds at the beginning and 1/250 at the end.

The cloud flow was photographed at ISO100, f8, shutter speed of 1/200 with 6-second intervals.

When I tried to take photos of the storm which was moving quite slowly, I used the wrong settings. I shouldn’t have adjusted the aperture and ISO during the series. At the beginning, I used ISO100 with f8, at the end ISO160 with f5. Meanwhile, the shutter speed changed from 1/6 to 5 seconds with 8-second intervals between the images, still the change was barely visible. I think generally 4-8 second intervals should be left between the images but it mostly depends on the weather conditions. If you leave too long intervals between the images, upon merging them into a video, the final result won’t be so smooth. It is advisable to take at least 300-400 photos per series, depending on the length of the final video. The downside of the whole process is the space took up by the images. Only the sorted raw photos take up nearly 1.1 TB on my hard drive.

I used only 2-second intervals between the images upon making the 4 series on January 1, 2013, because the flowing of the fog was quite fast, however, as I mentioned above, the length of the series was short.

The first photo shooting in 2013 was the first significant impulse to point this project rather than nature. The flowing of the fog was very spectacular. Later I will release a video of the series made of people in the city for comparison purposes.